Jerry Wade is a Baltimore based, singer, songwriter and guitarist. Over the last decade and a half, he has kept busy performing in many different musical incarnations.

After releasing an album of original songs entitled, Tales of Separation, he joined Patrick Kisicki to form the indie-rock outfit, Table Top Poets. Releasing two albums, Finding Your Pe(d)tals and The Secret EP, the band played throughout the Mid-Atlantic region and opened for the likes of some larger regional and national acts.

Currently, Wade is working on a collection of songs to be released in the near future. He is part of the adjunct music faculty at Carroll Community College, where he teaches guitar. Wade also performs weekly with various acts, most notably, in the musical groups, Jerry Wade & Sweet Blue Moons and Wildfire Duo, where you can expect to find him revisiting some of the best songs in classic rock, folk, and popular music. This and a sprinkling of Wade's indie, alternative and classic rock inspired original tunes, round out a night of fun, familiar and eclectic material. 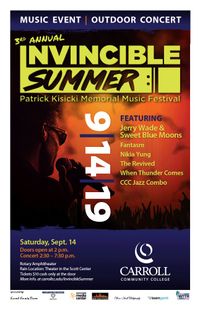 This is a drug and alcohol free event. Attendees may bring their own food, blankets and chairs. Games provided by Carroll's Early Childhood Education students.

Patrick Kisicki was a passionate musician, composer and educator who had a profound impact on all who knew him. He taught music courses, conducted ensembles and coordinated the guitar department at Carroll Community College from 2008-2015. He also taught at Peabody Preparatory, West Middle Schol, Encore Summer Music Camp, Maryland Performing Arts Institute and at Coffey Music.

Patrick performed regularly in the tri-state area, most notably in The Table Top Poets and Wildfire Three. Patrick also generously donated his time, organizing and directing the semi-annual fundraiser Kevin’s Concert—an event conceived by Patrick to raise funds and awareness about organ donation—for which he was named Volunteer of the Year in 2009 by the National Kidney Foundation of Maryland.

On March 2015, Patrick passed away from cancer. In his honor, we created the Invincible Summer Music Festival. Performers in the festival include students and friends of Patrick’s, along with a number of other area artists. In addition to great music, there will also be outdoor games, food trucks and vendors. All proceeds from the event will go towards a music scholarship in Patrick’s name.

More information about this event at www.carrollcc.edu/invinciblesummer.